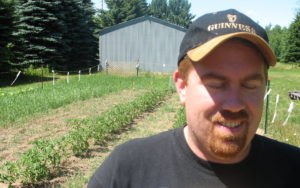 NorthernDruid.net was a very active website between 2005 and 2014. It had an active blog and a semi-regular podcast. Starting about 2013, I embarked on a new spiritual journey that would culminate with my reconciling my background growing up as a Christian to my evolving love for nature, Druidry, and aspects of Traditional Celtic Spirituality (some would call these more “Pagan” practices).

As I began healing wounds and reconciling my experiences of the past, there was a time where I walked away from this website (or “persona”) to explore Christianity much more. I became active in my church, and had learned about Angels and became a Certified Angel Card Reader. I drew closer to the man, Jesus, and his teachings, yet all the while I felt that my “church” was nature, and that I felt closest to God when I sat under a tall oak, or sat at the banks of rivers and lakes.

In 2015, I made a discovery that would bring me full circle. A cousin of mine had found through genealogical research, that I had a distant relative from Scotland from the 1800s. I took it upon myself to research this ancestor more, and found that Rebecca Pettiecord was the granddaughter of a man named James Malcolm, who lived in the Forfarshire district of Scotland (now known as Forfar in Angus) in the mid-1700s.

At that time in Scottish history, the system of clans was breaking apart under rulings from the British government. I found that those who were descendants of “Clan Malcolm” traditionally believed that they were the direct descendants of Columcille, or Saint Columba. 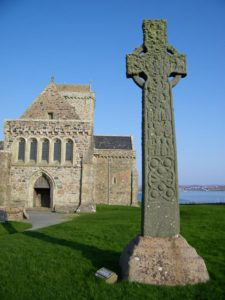 Columba was known as the first missionary to bring Christianity to Scotland’s Isle of Iona in the 6th century. He was known as a “friend to the Druids” of his time, and even interceded in a legal matter that would result in non-criminalization by the church of some of the pagan practices of the Druids. Columba was the founder of the Abby on the Isle of Iona, and as one enters, the prominent quote from Saint Columba greets them on a plaque – his poem, proclaiming “Christ is my Druid.”

Many of the Celts converted to Christianity willingly, believing that the coming of Christ was in fact also “their New Testament” and progression of their spirituality. But, the Synod of Whitby in 664 would put an end to the Celtic Christian notions of “Original Blessing” and “Listening to the Heart of Jesus” and the mystical melding of practices – Christian and Pagan, which blended naturally and peacefully for nearly two centuries in Ireland and Scotland.

Through more reflection, time, a divorce from a man whom I thought would be my soulmate until my death, and a lot of soul-searching, this “Reconcilliation” of the parts of my spiritual faith is now at a peaceful place. I’ve re-embraced my Northern Druid “moniker”, but in a new way as a Spiritual Director. As a Druid, I love and appreciates the teachings of Jesus AS WELL as the mystical Celtic traditions. I’m now more a “Celtic Christian” personally, and a fierce defender of religious freedom, and I believe that we are all our first authority in our Spiritual Life. We meet God/Source/The Universe (regardless of the name we give) through our own reflection, quiet times, and how we see this “Third Hand” working in our lives.  For me, I believe too, that there is space enough in both Christianity and Druidry to allow me to “walk between the worlds” without dishonoring either paradigm.

So once again, spiritually, I consider myself an Earth-Loving-New-Age-Christian-Unitarian and Celtic Druid. I’ve always been “out of the box” in my life as an individual – respecting the gifts of human diversity, supporting equal rights for all people, being a steward of the land.

I believe that all of us are born with an intuitive sense, a connection to the natural world, and the right to our own personal definition of spirituality.   Even in the realm of Druidry, I believe that one’s own definition is “their own right definition”. Only a love of Nature is required.